Practice Models for Efficiency and Happiness

Accreditation Statements:
The Missouri Association of Osteopathic Physicians and Surgeons (MAOPS) is accredited by the American Osteopathic Association to provide osteopathic continuing medical education for physicians. MAOPS designates this program for a maximum of .5 AOA Category 1-A Credits and will report CME and specialty credits commensurate with the extent of the physician's participation.

Missouri Association of Osteopathic Physicians and Surgeons (MAOPS) designates this live activity for a maximum of .5 AMA PRA Category 1 Creditä.  Physicians should claim only the credit commensurate with the extent of their participation in the activity.

This activity has been planned and implemented in accordance with the accreditation requirements and policies of the Accreditation Council for Continuing Medical Education (ACCME) through the joint providership of the Missouri Association of Osteopathic Physicians and Surgeons (MAOPS) and Kansas City University College of Osteopathic Medicine. MAOPS is accredited by the ACCME to provide continuing medical education for physicians.

Planning Disclosure:
The Kansas City University College of Osteopathic Medicine Education Planning Committee has no relevant financial relationships with any organization producing, marketing, reselling, distributing health care goods or services consumed by, or used on, patients relative to the content of this presentation.

Grievance Policy:
All grievances should be in writing and should specify the nature of the grievance.  Initially, all grievances should be directed to MAOPS Executive Director, who will then forward said grievance to the Education & Convention Committee.  All grievances will receive an initial response in writing within 30 days of receipt.  If the participant does not receive a satisfactory response, then they can then submit a complaint in writing to the Council on Continuing Medical Education of the AOA at 142 East Ontario Street, Chicago, IL 60611. 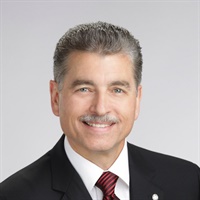 Robert S. Juhasz, DO is a graduate of the Class of 1981 of the KCU College of Osteopathic Medicine.

He has been privileged to lead at the Cleveland Clinic as a Medical Director of a Family Health Center of over 100 clinicians and then as President of South Pointe Hospital, from 2013-2017.

He has lead in local, state and national osteopathic medical organizations, including the American College of Osteopathic Internists Board and the American Osteopathic Association, where he was elected as the 118th President of the AOA, where he had the privilege of shepherding the early implementation of the Single Accreditation System.  He continues to serve on the AOA President’s Advisory Council.

Dr. Juhasz was elected to the Board of Directors of the Accreditation Council on Graduate Medical Education in 2017, where he serves on several committees and task forces.

Dr. Juhasz is a member of the KCU Board of Trustees and had been the Honorary Chair for the university’s Centennial Campaign in 2016.